On November 1st, 2018, the Dresdner Sinfoniker celebrated their 20th birthday with the performance of three works by a wide variety of composers, soloists and ensembles. The anniversary concert, which took place during the Jazztage Dresden in the Erlwein Capitol, was a great success – Michael Ernst writes in the online edition of the “neue musikzeitung” of 4.11.2018 under the title ” There, where it hurts – 20 years of Dresdner Sinfoniker”:

A world without borders, that is their goal. No insurmountable hurdles for people to make it difficult for others to move freely and think freely; but also no genre attributions that define musical taboo zones and prevent innovations such as improvisations. (…) The legendary birth of the Dresdner Sinfoniker took place exactly two decades ago. It would hardly have been worth mentioning if this ensemble, made up of musicians from renowned German and European orchestras, had it not repeatedly attracted attention with its musical quality and specific content. Their common goal is a noble one: to touch people through the spirit of music and change the world for the better. (…) Saxony’s Minister of Art, Eva-Maria Stange summed it up in her eulogy for the concert as follows: The Dresdner Sinfoniker are “always there where it hurts”. Consequently, the Dresden Symphony Orchestra have conceived its jubilee concert to mark its twentieth anniversary, showcasing a diverse musical score including Frank Zappa, Andreas Gundlach and Enrico Chapela.

Zappa’s music, which has fascinated the Sinfoniker since their beginnings, was heard in collaboration with the “Universal Druckluftorchester ” (literal translation- Universal Compressed Air Orchestra), an ingenious device comprised of wind and key instruments atop an Italian tricycle and operated by compressed air. Created by Peter Till, a craftsman and sound magician whose orchestral instruments are described as “Music on Wheels”. The music machine is operated via the driver’s seat creating an optical and acoustic orchestral delight, which for this concert also included a standing illuminated marimba. After a symphonic solo, the “Universal Druckluftorchester ” performed two more parts from Zappa’s last great legacy “The Yellow Shark” from 1993 culminating in a dazzling performance.

The composer and keyboard virtuoso Andreas Gundlach, composed a concerto for synthesizer, piano and orchestra for Dresdner Sinfoniker’s jubilee. Titled “Quartüürium”, the composition suggests that it consists of fourths and four-tone melodic runs. Originally intended to be played alongside a pianist, Gundlach was forced to play the piece himself due to a sudden absence, resulting in a virtuoso performance. The resounding concert, simultaneously achieving the sounds of an orchestral tutti, magical solos and jazzy impulses.

The rock opera “Disidentes” by the Mexican composer Enrico Chapela, was premiered as the third piece of the evening. In keeping with Dresdner Sinfoniker’s history of combining contemporary music with socio-political themes, Chapela’s piece centres on the protest movement and massacre of students in the Plaza de las Tres Culturas in Mexico City , 2nd October 1968. A legacy to the hundreds of students that were murdered, the performance had a uniquely Mexican sound consisting of an orchestra, band and four soloists. Tenor singers Juanra Urrusti, Hazel Mendoza and Humberto Alarcón and Blazko Scaniglia (bass baritone) shone along-side electric guitarist and composer Enrico Chapela.

A production of the Dresdner Sinfoniker in cooperation with the Jazztage Dresden. Supported by the Ostdeutsche Sparkassenstiftung together with the Ostsächsische Sparkasse Dresden, the Kulturstiftung des Freistaates Sachsen and the Landeshauptstadt Dresden – Amt für Kultur und Denkmalschutz.  The concert is co-financed by tax revenues on the basis of the budget approved by the members of Saxony’s state parliament. With the kind support of the GEMA Foundation and Neumann & Müller Veranstaltungstechnik. 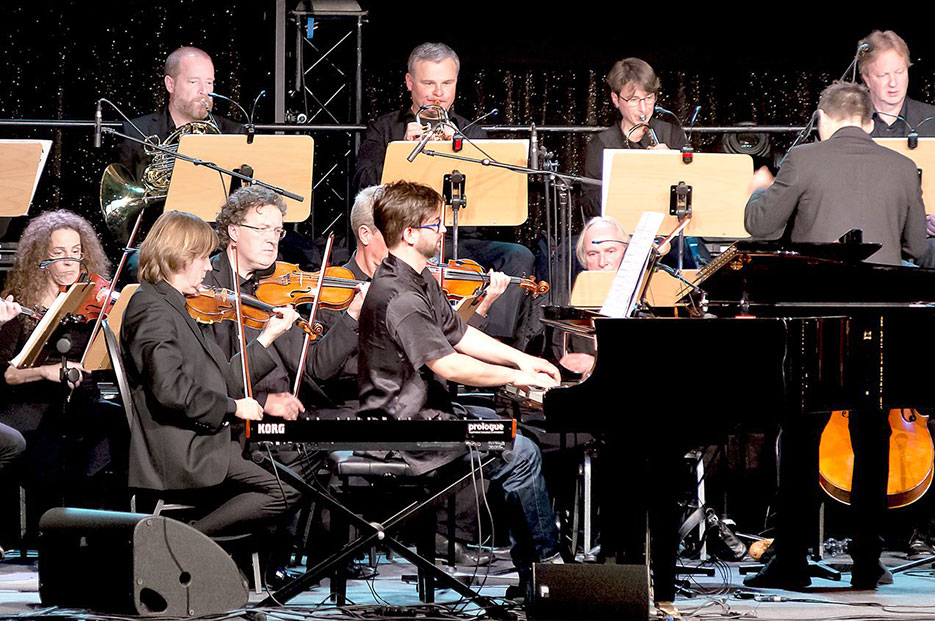 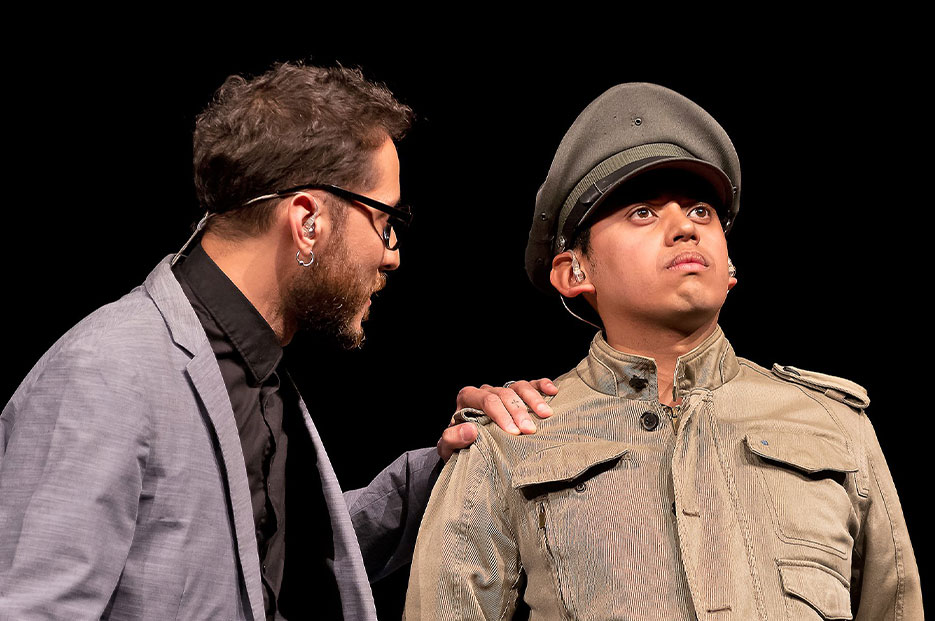 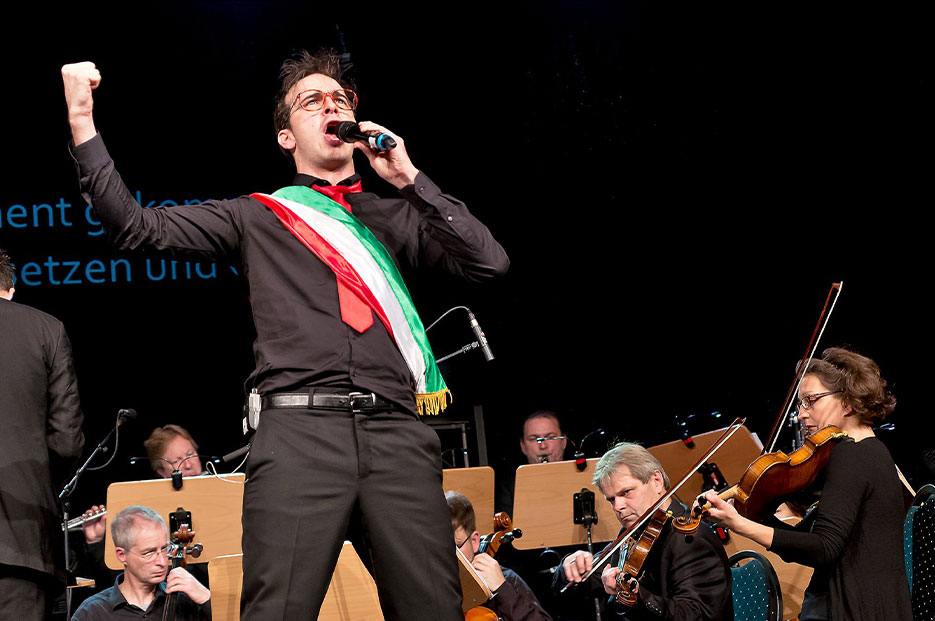 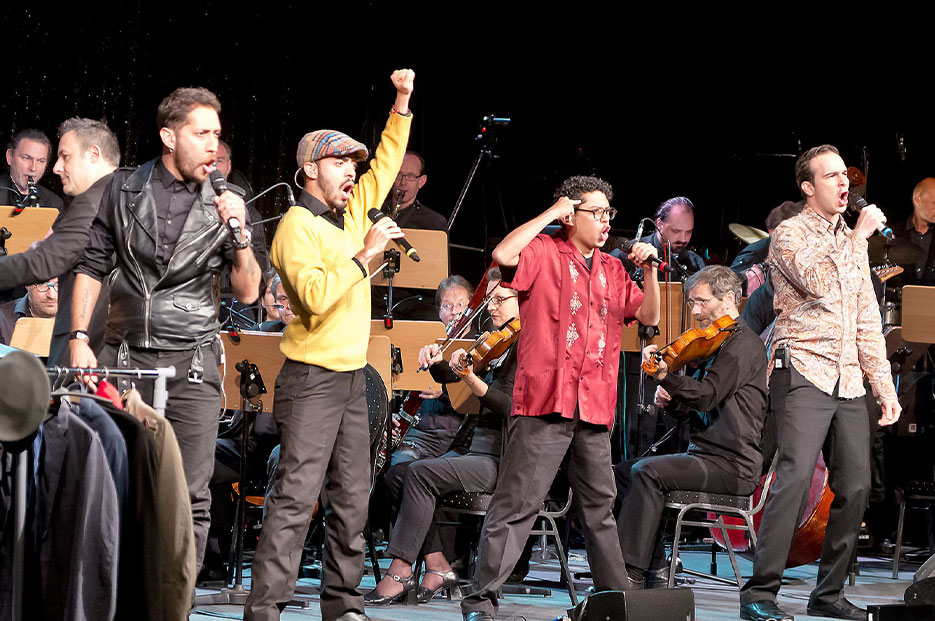 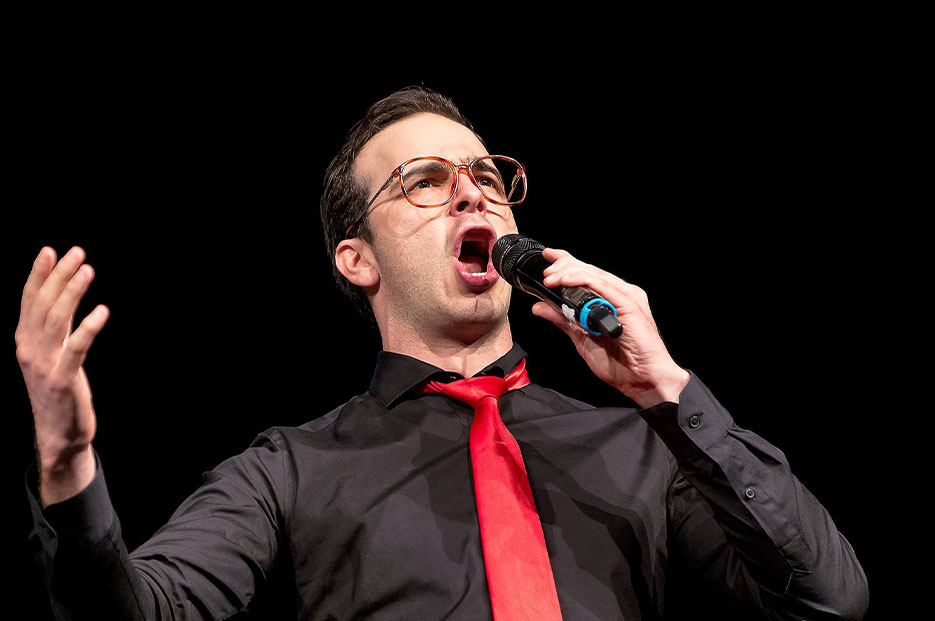 Hailed by the critics as Monsieur 100,000 Volts, pianist Andreas Boyde’s performances have electrified audiences worldwide. His … read on

Enrico Chapela studied guitar performing and composition at CIEM academy in Mexico. He obtained a Master degree at the University … read on

Tom Götze, born in Dresden in 1968, studied tuba, bass guitar and double bass at the conservatory in Dresden from 1984 to 1990. Since studying … read on

Harald Thiemann was born in Görlitz in 1966. He studied Classical Percussion at the “Musikhochschule Dresden”. He gained his first experience … read on

The Munich guitarist, composer and arranger studied jazz guitar at the GIT (Los Angeles), the Graz University of the Arts, the Sibelius Academy … read on

Blazko Scaniglia lives and works in Mexico City as a singer and songwriter. His extraordinary voice and his acting talent make him a hypnotic … read on

Hazel Mendoza Fuentes studies composition at the Faculty of Music of the Universidad Nacional Autónoma de México. In 2016 he won  … read on

Born in Mexico City in 1990, singer Humberto Hernández Alarcón began his musical studies at the Centro de Educación Artística of the Instituto … read on